Hi folks!  Well, we had a bit of a scare this week.  Kim and John weren’t sure if I should blog about it…..but then they thought it might be something important for people to be aware of. So, here is my PSA!

On Tuesday night, Kim and John put us in the car and off we went!  Our destination was the Sutherland Beach Dog Park.  We haven’t been there for a while, and it would be Levi’s first time.

Kim said she was extremely tired as we headed out, but we were determined to go.

Off we went!  This is a great park, and we were enjoying it, when all of a sudden Kim had chest pains and her left arm went numb.  She was all bent over…..and said she just needs a minute.  She sat down on the grass, but it didn’t get better.  John said “I think you are having a heart attack and Kim said she thought she needed to go to the hospital.

So, we all got our leashes on, and Kim hobbled her way to the car.   In the car Kim said “I think I need to go home and get my health card”.  John said “ no way we are going to emergency” and off we went. We waited in the car and Kim went in with John. She said there were lots of people waiting in emergency, but the nurses got her in right away.  They started tests and gave Kim some super strong drugs (morphine) for the pain.  That was John’s a-okay to take us home……

Kim had 2 EKGs and 2 blood tests and both were normal.  It was very weird….they told her she should be able to go home,and that they don’t know what caused it, but it was probably her stomach……

But before she could go, they did a third EKG and blood test and guess what?!… they showed something wrong.   So, they kept her overnight and treated her like she had a heart attack and she was visited by the cardiologists in the morning.  What was wrong?  It was tricky because they said she had no history of cardiac problems in her family, no Illnesses and she’s pretty healthy, and she’s relatively young 😉.

Well folks, there is something called SCAD…spontaneous coronary artery dissection.  Kim fits the bill….mostly affects women in their 40s and 50s, no history, healthy…..

Here is a link with more information: 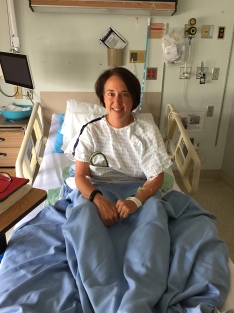 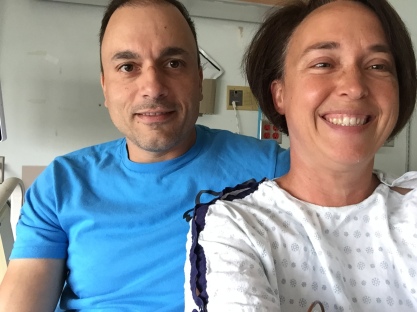 While it was scary, Kim said there are many things to be grateful for!

*the stars were aligned….John was with her, they acted quickly and John rushed her to the hospital and…didn’t let her go home for her health card

*they recognized early that it was a heart issue….especially with the numb left arm

*thanks to awareness ads by the Heart and Stroke foundation, Kim was aware that women also have heart attacks, and many times ignore the symptoms

*the doctors completed 3 tests…..the third test was the one that showed something was wrong with her heart

*we were so lucky this happened close to town, and not when they were out of the country or hiking in the mountains!

*big thank you to our friends and family for support

So folks…enjoy every moment….kiss your family and friends and hold them tight.  Life is good, breathe deeply and be thankful, I know we are!

Update :  Kim just saw her doctor….she will be out tomorrow!  They are only waiting on tests and the doctor said it’s easier if she stays a day to get the test done…..much faster than outpatient.  She can go back to regular (not strenuous) activities right away….so we get to go back to our daily walks!  Ain’t life grand!  We are back to normal 😜😉👍

A big thank you to all of the doctors, nurses and staff at Royal University Hospital! They took great care of Kim and deserve a big paws up!

7 thoughts on “Teddy’s Public Service announcement. We had a scare with SCAD”