Well folks, today was a rainy day in Prince Edward Island, so this turned into a driving day, with Kim and John planning indoor activities. They went their separate ways from Kim’s folks, and planned to meet them later on at the Inn at Fortune Bay….they were going to stay there for the night and also have dinner. This inn is run by celebrity chef, Chef Michael Smith…more about that later.

Kim and John headed south to the town of Victoria, which was recommended by a local that they met on the flight over. There were a few small artisan shops here…many of which were closed as it was the end of the season. They stopped for lunch at the Lobster Pub and Eatery. They shared a delicious lobster chowder and lobster roll. They both thought this was their best meal yet. All made from scratch. After lunch the toured the small Main Street. 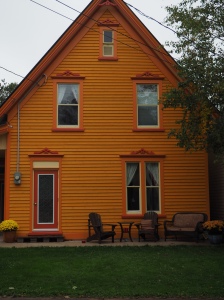 Next stop….a look out for the Confederation Bridge. The bridge links PEI with New Brunswick. It is 12.9 km long, and is the worlds longest bridge over ice-covered water.

Onwards to Fortune Bay, home of the Inn at Fortune Bay, owned and run by Chef Michael Smith. They stayed here for one night and took in the Fireworks Feast. It was very rainy, but that didn’t stop them from having an outdoor tour by Farmer Kevin. He took them on a tour of the gardens, and explained how they organically grow everything used in the meals. Everything is organic, and they challenge the chefs to use all of the ingredients, and not to waste anything. Everyday the menu changes, depending on what is available. He encouraged everyone to try everything, including things like edible flowers….I think everyone was up to the challenge!

Well, that’s all folks…..the family figures they have now eaten way too much……the food is amazing, but they need to slow down the pace…..stayed tuned for an update on what they do next….I think it involves less food and more outdoorsy stuff. I still think they can bring some food home for me !